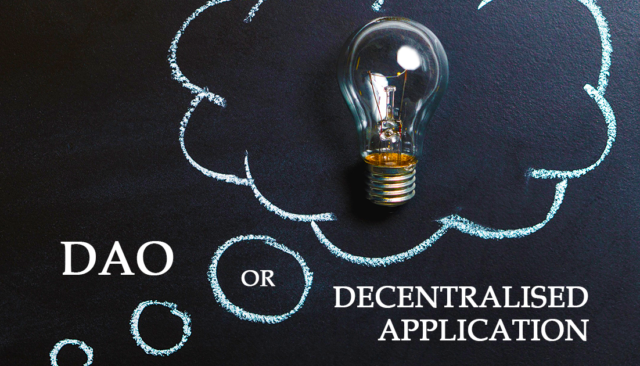 Decentralized application (Daaps) and decentralized autonomous organization (DAO). What are they? These two concepts are some of the major topics in the digital space and are relatively new technologies even to some tech enthusiast. By definition, the two concepts are seemingly similar, but in context, they have key differences.

A DAO is sometimes referred to as a decentralized autonomous corporation (DAC), and it is defined as an organization that runs on encoded computer programs commonly known as smart contracts. Rules governing the organization and transactions undertaken therein are stored and maintained on the blockchain. DAOs intend to put certain company rules into code, the kind of rules that an ordinary company would set at the onset. In some way, one would be right to state that a DAO is similar to a normal company. The only difference between the two, however, is that rules in a normal company are not enforced digitally.

A smart contract can simply be defined as a mechanism that involves two parties and digital assets in which case one of both parties put in assets, which are then redistributed among the parties based on a set of data, which is not known at the time of getting into contract. The key characteristic of a smart contract is that it entails a fixed number of participants. Noteworthy, all parties do not necessarily need to be known at the initialization stage of the contract.

Dapps are split into three categories: apps in which money is involved, apps in other categories such as governance and apps that manage money. The app that manages money essentially facilitates an ether exchange for contract settlement. Distributed computer nodes in the Ethereum network facilitate the distribution of this data.

The first app combines information outside the blockchain with money. For instance, a car insurance that relies on the political state at any given time. In this case, a car owner purchases a derivative that pays him if their car is damaged in politically related riots. Provision of updated information outside the blockchain for these apps is made possible by oracles. Whether this integration can be done in, a decentralized way is still a sketchy issue.

Dapps in areas such as governance is similar to DAOs. The focus of these apps to set certain rules at the onset of the company such as the voting process and management of funds then let the company run on its own. This is a concept that is quite ambitious, and though these apps have not been successfully applied in practice, their development is still underway.

In conclusion, Dapps and DAOs are relatively new concepts. The Ethereum network and Ethereum enthusiasts are however on the forefront in an attempt to develop these concepts further. The two concepts are closely similar but pertinent differences discussed above set them apart. You can read more about differences between Ethereum and hyperledger.