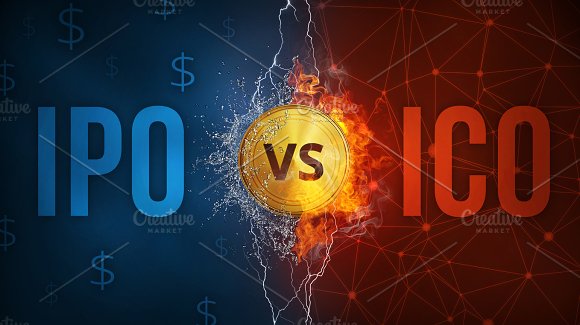 ICO vs IPO is one of the main comparisons made in the blockchain industry. the distinction between the two can help investors make decisions. Initial Coin Offering (ICO) is an unregulated means by which funds are raised for a new cryptocurrency venture. ICO is a means of crowd funding centered on cryptocurrency which can generate capital for startup companies. On the other hand Initial Public Offering (IPO) is the first time that the stock of a company is offered to the public. IPOs are often issued by younger companies that are trying to get capital to expand their operations. However, large privately owned companies seeking to become publicly traded can also do IPOs.

Let’s discuss further the distinction between ICO vs IPO in terms of:

An IPO often occurs at the last phase of development in a company. By this time the company is already profitable and has a viable product that generates revenue. The capital rais ed at this stage is long term not working capital. Most IPOs have suffered the risk of providing working capital for the entity during initial stages of development and may now occur as liquidity event for the venture firms. In comparison, ICO is for a new startup with unproven concept seeking to raise initial capital to start its operations. So in terms of returns, an investor in an ICO should demand higher rate of return than the investor in an IPO. 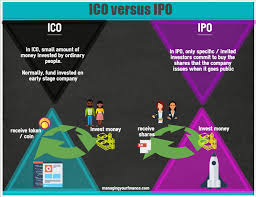 In the case of an IPO, upon subscription an investor is entitled to claim in the entities assets not liabilities (equity) and has a right to vote on matters concerning the company. On the other hand an investor in ICO can claim usage of a token but have no equity in the underlying corporate entity neither does he have voting power. IPO promises to share dividends from the company profits while ICO does not offer dividends but promises growth in price of its token whereby an investor can sell it to make money.

IPOs are highly regulated thus, before issuing its shares to the public; a private company has to make applications to the relevant authorities.  Startups issue ICOs decentralized platforms that are against international borders hence making it hard to regulate them. In order to become legitimate businesses, most startups using ICOs abide by existing regulatory requirements. The success of an ICO depends on the strength of their project and their ability to convince investors it will work. That aside, anybody around the globe can launch an ICO and invite the public to but it.

There are many beneficiaries of IPOs since they are mature industries.  For instance, the exchange, brokers and the middlemen. ICOs have eliminated middlemen hence cutting the huge margins that they earn. Looking at the equity market, brokers earn less than 0.1% on a trade for an ICO but earn up to 4% for an IPO. As a result more brokers want to be part of the deal team. However, for ICOs, there is largely no middle men expect the exchanges where investors can buy the coins.

Investors are required to be aware of the risks involved in order for them to be subscribed for an IPO. The brokers access the basic requirement that the investor must fulfill using the Know Your Customer (KYC) protocol in order to prevent money laundering. In an ICO, anyone with an internet connection can participate in it. This is because in most cases there are no requirements on the investors experience and the investor himself is not known. The process of conducting ICO involves rigorous ICO marketing strategies and tips as outlined in this post.

An IPO market uses sophisticated methods to issue market shares as opposed to ICO. Banks also guarantee to be middlemen of any shares that investors fail to buy. Currently ICO market is flooded with investors who are optimistic about the future of a particular coin since the market is largely untested. the allocation of funds is dictated by the founding team. However, the amount that each investor can invest is largely based on amount of money an investor is willing to spend.

Projects funded by ICO and IPO are linked to control and management. IPO work well with centralized organizations whereas ICOs work well with open source projects that have no central authority just like most blockchain startups.

It is believed that most of these differences will disappear as the ICO market continuous to mature. The only notable difference that will be there between the two then will be IPOs will continued to be used for other types of businesses while ICOs could gain mainstream adoption by blockchain based startups which adopt decentralization.