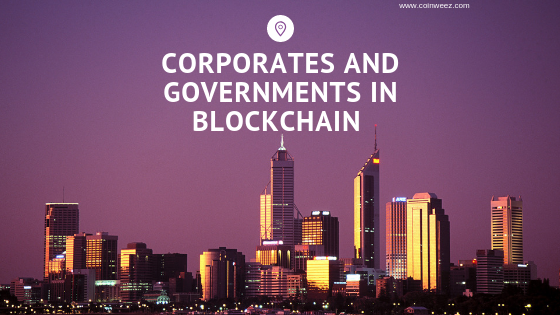 Over the last couple of years, more and more corporations that are not originally blockchain-based companies are adopting a proactive approach of trying to find ways they can get involved in blockchain technology.

Since Ethereum was introduced in 2015, a  lot of companies have started working on enterprise solutions using blockchain technology. Furthermore, government agencies and other public and private entities have made proclamations about either accepting crypto as a means of payment or working on modalities of regulation or using blockchain in some aspect of their operations.

As for private companies, Facebook has been on the news for over a year with the formation of a team within its company to explore blockchain technology. Although its not yet known the progress made by the team, one of the main ideas floating around is that the company could use crypto as  means of payment for its advertisements services with formation of its own native coin. This is just speculation since we are yet to see how that puns out.

Most of companies operating in the crypto space actually run on Amazon Web services for hosting. AWS is now exploring how it can add value to blockchain transactions. Some of the proposed solutions include: Using AWS as a foundation for blockchain technology architecture, Amazon API gateway, Amazon cloudHSM among others,

Governments, agencies and other public entities have also not been left behind. Estonia, Malta and Switzerland are some of the countries we have analyzed in the past.

In UK, The Food Standards Agency (FSA) announced in July last year that it had completed a pilot on using blockchain technology in tracking meat distribution in cattle slaughterhouse. Other agencies in UK such as Defra also claimed it was exploring how to enhance food traceability and HM land Registry exploring land registry.

in USA, states have been making their own pronouncements regarding how they want to approach blockchain technology legislation.  Vermont state announced in late 2018 that it was forming a working group to analyze how the state could use blockchain technology to solve some of its perennial problems. Among the issues it was facing are: its persistent security breaches, online activities and perspective data hacks. Working and consulting with other agencies, stakeholders, blockchain associations and other experts in the industry the group will also seek to evaluate whether the state needed blockchain related legislation. Another state, Wyoming has so far announced 5 blockchain-friendly bills. The latest one allows banks to provide banking services to blockchain companies. A new banking category would be created by banks called ‘Special Purpose Depository Bank’ a type of sandbox, that banks in the state would use to provide services for blockchain companies in the state. In addition, the state recently introduced legislation that would allow issuance of stock certificates on the blockchain. If passed into law, stock holders would receive share certificates in form of certified tokens and stored in electronic format on the blockchain or auditable format. Coindesk also reports that ‘the token certificates would be authorized via the network signatures of two officers or directors of a corporation’.

In China, although the governments reactions to cryptocurrencies has been hostile especially banning of ICOs and crypto exchanges, corporations have been working on various blockchain based solutions and even obtained patents. ICBC( Industrial & Commercial Bank of China) has filled a patent that would see the corporation use blockchain to verify digital certificates. Furthermore, the China Construction Bank Corporation revealed that it was working with IBM blockchain platform to streamline how banks and insurance companies sell their products.

In South Korea, GOPAX, a crypto exchange became the first company to obtain K-ISMs Certification showing signs that the government was in support of blockchain based companies.

In Africa one of the biggest pronouncements in 2018 was by the Kenyan government’s decision to form a 11 member taskforce to explore how the country could take advantage of blockchain. The committee said it finalized its report but the findings have not yet been released to the public. South Africa has also been on the forefront in trying to make some type of blockchain regulation. It has South African Blockchain Consortium and recently, the South Africa reserve bank produced a consultation paper detailing its steps on how it is approaching crypto regulation. From the paper it seems that it is adopting a phased approach starting with registration of companies offering blockchain services in the country. The paper does not outline any concrete steps of outright ban of cryptocurrencies.

Away from the regulatory space, we’ve also seen corporations such as IBM do pilots in the continent. one of them is Agriculture digital wallet which  as they define is

‘a blockchain-enabled, AI-powered decision support platform that enables instant tracking, capturing and sharing of data while creating and end-to-end trust transparency for all parties involved across the agribusiness value chain’.

IBM has also partnered with companies such as Twiga Foods to offer blockchain based micro financing in Kenya.

in 2019, some of the these projects would be expected to produce progress reports.For example, Walmart says that by September 2019, some of its suppliers of green leafy greens will be required to have implemented the farm-to-store blockchain based tracking system. Furthermore, majority of the governments that have formed task-forces and work groups around blockchain and crypto will be expected to not only show results of their studies but also begin steps towards implementing the recommendations. The success of such projects could act as case studies for the viability of blockchain-based systems and could see other corporations and governments roll out similar projects.