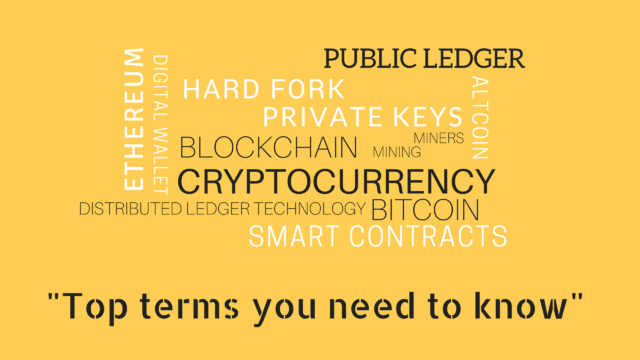 Blockchain is an incorruptible digital ledger that is programmed to record almost everything of value from economic transactions to financial transactions.  Blockchain technology has some key words that are used while conversing about this technology. I thought of coming up with a blockchain glossary which would be of great help in solving the awareness and scalability problem to beginners who wish to join this revolutionary technology. After thorough research I came up with the below list of terminologies and there meaning in line with blockchain technology.

This simply means that someone has the ability to control majority of the network hash rate to review transaction history and prevent new transactions from confirming. If the group/entity is malicious they can issue conflicting transactions to harm the network if they want to.

These are cryptocurrency addresses that are used to send receive transactions on the network. An address is usually a string of alphanumeric characters.

These are distributed ledgers used by parties involved in a transaction to negotiate and reach an agreement.

Altcoin is an abbreviation of “alternative to Bitcoin”. This term is used to describe any cryptocurrency that is not Bitcoin. Generally Altcoins project themselves as better substitutes to bitcoins.

ASIC is a silicon chip designed to do a single task. In Bitcoin they are designed to process SHA-256 hashing problems with a goal of mining new bitcoins. ASICs are made for mining and offer notable power savings.

Bitcoin is the first decentralized cryptocurrency that runs on a global peer-to-peer network without the need of a central authority. Bitcoins are not physical in nature like fait currencies.

A block is a package of data that has been permanently recorded on the blockchain network. Each block on the blockchain holds records of all the recent transactions and a reference to the block that came immediately before it.

As mentioned earlier blockchain is an incorruptible digital ledger that is programmed to record almost everything of value from economic transactions to financial transactions. Blockchain is a record of all the transactions that ever occurred, from the first block to be created to the latest block, hence the name blockchain.

It is a web tool that provides detailed information about blockchain blocks, transactions and addresses. With blockchain explorer you can watch and follow live all the transactions happening on the blockchain.

Block reward is the amount a miner can claim as a reward for creating a block which is 12.5 BTC. Depending on the policy used by the cryptocurrency in question and whether all of the coins have already been successfully mined, block reward can be a mixer of coins and transaction fees.

A central ledger is a ledger maintained by a central agency.

This the algorithm used to for encrypting and/or decrypting information. Cipher is an encrypted message also known as a “code”.

The agreement reached upon when all participants in the network agree that a transaction is valid and that all the ledgers are identical to each other is what is called consensus.

This is a blockchain where the consensus process is controlled by nodes that are pre-selected. Take for instance a consortium of 20 banks, each bank operates a node and of which 15 banks must sign every block for it to be valid. The rights to read the block may be permissioned or public.

A cryptocurrency is a digital currency that is used as a medium of exchange and uses cryptography for security. They are not in physical form and are never issued by central governments. Examples include, Bitcoin, Litecoin, Ethereum Ripple and many more.

This is the science of encrypting messages so as to keep them secure.

These are applications that are open source and run on a P2P network of computers rather than a single computer and are not controlled by a single entity.

DAO is an organization that is run through rules encoded as computer program called smart contract. It is operated without any human involvement under the control of incorruptible set rules.

Distributed ledgers are ledgers in which data is stored and shared across a wide network of computers. The ledger may be private or public.

It’s a digital code generated by public key encryption that is attached to an electronically transmitted document to validate and authenticate its content and senders identity.

Ether is the unit of cryptocurrency used in Ethereum blockchain that is used to pay for transaction fees and other services on the network.

EVM is a Turing virtual machine that allows anyone to execute arbitrary EVM byte code.

This is money declared as legal tender by states government. E.g. dollar, shillings

Fork creates an alternative version of blockchain leaving two blocks to run concurrently on different parts of the network.

This a change to the blockchain protocol that makes previously invalid blocks or transactions valid, therefore requires all users to upgrade their clients

Hashcash is proof of work system used to restrict spam of emails and prevents attacks of service.

Hashrate is the total number of hashes that a miner can perform in a given period of time.

It’s the reduction of block reward given to miners once they have mined a certain number of blocks, usually 210,000 blocks.

ICO is a means of crowd funding centered on cryptocurrency which can generate capital for startup businesses.

Litecoin is a peer-to-peer cryptocurrency that is fully decentralized and has no central authorities. It is used as a global means of exchange with near-zero charges on payments.

Mining is the process of verifying and compiling transactions into blocks by solving computationally difficult puzzle.

This is a protocol for a group of miners to work together then share the reward equally according to the amount of work contributed to the probability of finding a block.

These are addresses that allow parties to use more than one key to authorize a transaction hence minimizing risks of theft.

Node is any computer that is connected to the blockchain network.

Oracle acts as a link between the outside world and the blockchain by providing smart contracts with data.

This are decentralized transactions that occur directly between two parties through a network that is highly interconnected.

This is a ledger that a user cannot access without authority.

This is a randomly generated number that allows you to access the tokens in a specific wallet. They should not be shared.

PoA is a consensus mechanism whereby buy one client with one particular key is given the right to make all the blocks in a private blockchain.

PoS is a consensus algorithm that issues rewards based on the number of coins that one owns.

This are set of rules that govern how to transmit or exchange data across networks.

It’s a cryptographic algorithm used by cryptocoins such as bitcoins. It consumes a lot of power and processing time.

These are computer protocols that are intended to digitally facilitate the performance of a contract.

It’s a change in the bitcoins protocol whereby only previously valid transactions are made invalid.

A token is a digital identity for something that can be owned.

These are fees charged on transactions sent across networks.

Wallet is a file that contains private keys and communicates with corresponding blockchain and requires backups for security lessons.

With the above simplified definitions of the key words used in blockchain technology, one can easily understand how this technology works and develop interest of wanting to know more about it.