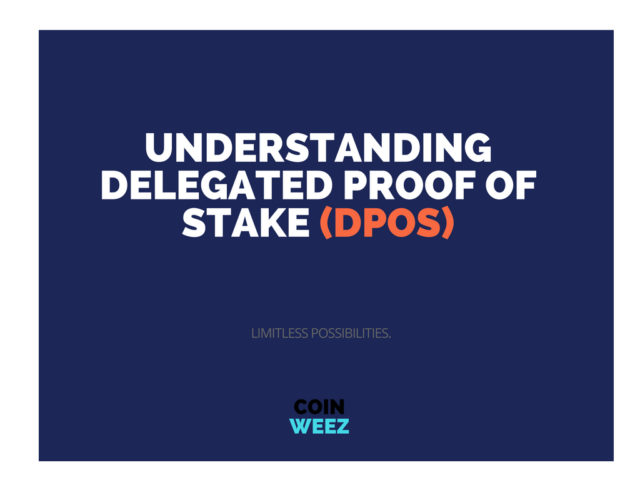 Delegated Proof of Stake (DPoS) was invented by Daniel Larimar in 2015. It is an alternative consensus mechanism and an improvement of the Proof-of-Stake (PoS) model. DPoS is the most flexible, most decentralized, most efficient and fastest consensus model currently available in the blockchain space. This consensus mechanism leverages the power of stakeholder approval through voting to resolve issues in the blockchain through a fair and democratic manner.

Process of delegated proof of stake

In delegated proof of stake, the stakeholders elect what are known as witnesses. The witnesses are responsible for adding blocks to the blockchain and are rewarded with associated fees. The pay rate for witnesses is set by the stakeholders through the elected delegates. These witnesses should be chosen with the best interests of the network at heart since they keep the network running safely and smoothly.

Stakeholders have the ability to vote for as many witnesses as they wish so long as 50% and more of the stakeholders believe that adequate decentralization has been achieved. The witnesses with the most votes are elected. The voting process is continuous and the witnesses have an incentive to carry out their function to the highest standard lest they lose their position. Stakeholders have a reputable scoring system to help them assess the quality of the witnesses.

There are different versions of DPoS. Some of these require that the voted delegates deposit certain amount of funds into a time locked security account as a show of their commitment to the blockchain. The funds are confiscated in case the delegate has any malicious behavior.

By selecting block producers, transactions are confirmed in an average of just 1 second. This is very fast when compared to the current system in Bitcoin because of their Proof of Work consensus mechanism. Additionally the delegated proof of stake protocol is designed to protect all participants in a blockchain from unwanted regulatory interference.

Delegates are also chosen in a similar manner as witnesses. Delegates are co-signers on a special account which holds the privilege of proposing changes to parameters of the blockchain. These include all aspects of transaction fees, witness pay, block sizes and block intervals. Once delegates have submitted the changes, the stakeholders then have a time period within which they will decide whether or not these changes should be implemented.

This method of approval ensures that the delegates do not have power over the system and cannot change anything in the blockchain. The changes to the network parameters are only made by the stakeholder. Additionally, this system protects the delegates from regulations that may apply to administrators of cryptocurrencies.

Advantages of a delegated proof of stake mechanism

There are many cryptocurrencies currently using DPoS and others being developed to use this consensus mechanism. Some of these include; BitShares, EOS, Lisk, Ark, Nano, Steem, Cardano, Tezos, Rise and  Oxycoin.