Data from coin.dance analyzed by Cryptoslate shows that the largest market by volumes on localbitcoins is Russia, followed by US, China, UK, Nigeria, Venezuela, and Colombia among others. From Jan 1, 2017, to Oct 1, 2019, shows that 1.6 million bitcoins were traded on localbitcoins. 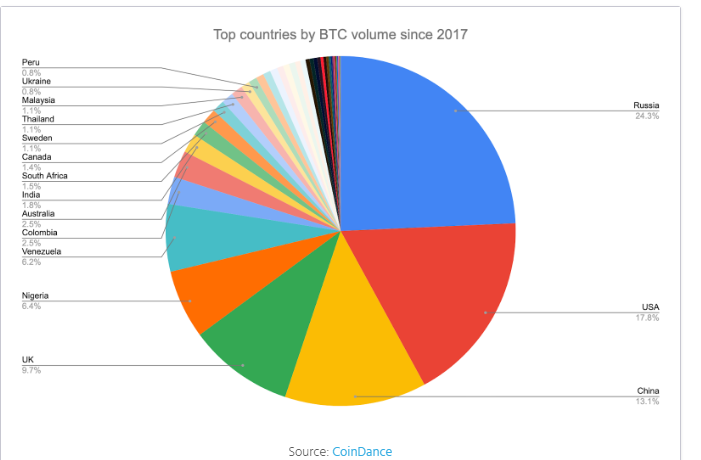 Sub-Saharan Africa, Latin America, and Eastern Europe have the highest growth rates on localbitcoins. On the other hand, trade volumes from Western Europe, New Zealand/Australia, Asia Pacific, and North American have remained consistent since mid-2018. 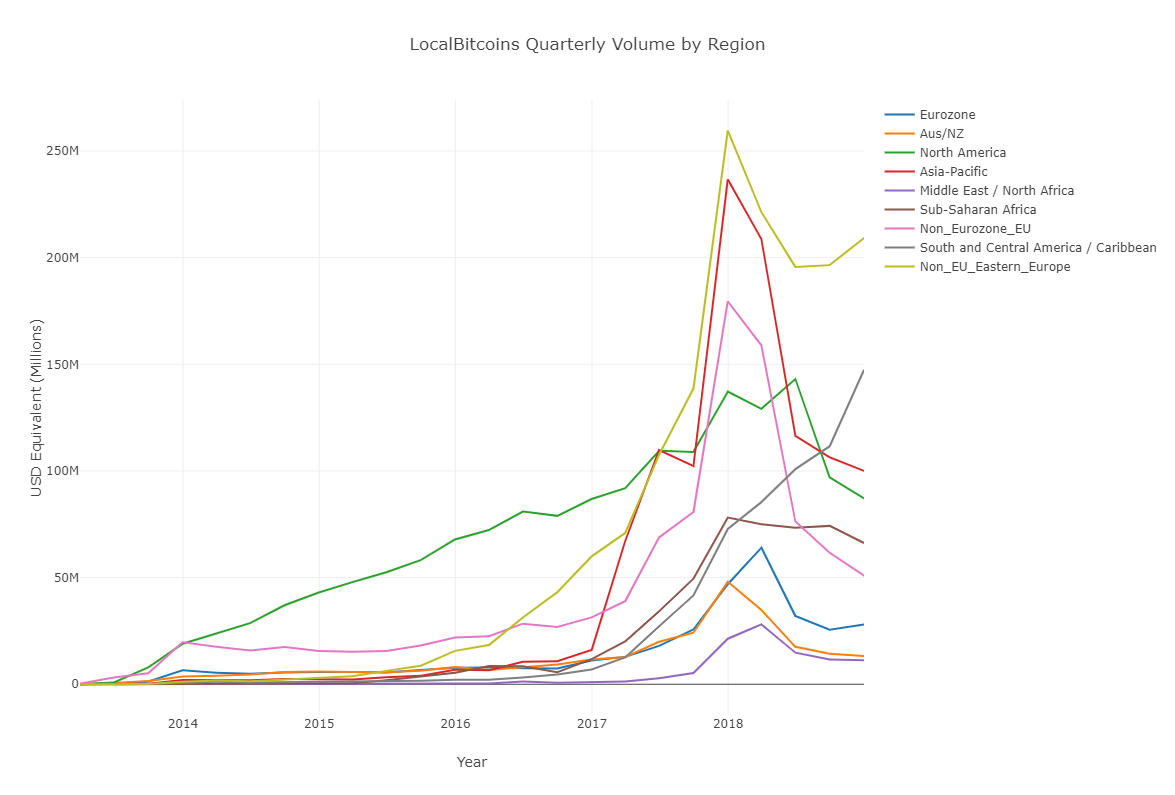 P2P exchanges work differently from other exchanges in that they match two people wanting to trade with one another. The price is not set by the platform but by the seller and buyers can choose from an array of sellers. Because the price is not set by the platform, there is always a difference in prices at P2P exchanges compared to other exchanges. The challenge and opportunity with P2P platforms like localbitcoins is that they can have large bid-ask spreads which can make it expensive for a buyer but good for sellers. This provides a good opportunity for holders to sell at a premium as demand increases.  Data analysis from Matt Ahlborg suggests that most of the volume on P2P platforms is most likely not from speculation but for practical uses such as cross-border transfers and as an alternative to the deteriorating local currency. Nonetheless, speculation also makes a huge chunk of the volume especially in countries facing high regulatory backlash against use of cryptocurrencies.

Countries with a high level of depreciating local currencies are most likely to turn to alternatives like bitcoin. However, it turns out that in most of such jurisdictions, crypto activities are usually banned. P2P platforms provide a lifeline. For example, data from Coin.dance shows a spike in trading of bitcoin against Argentine Peso in the week ending November 11 at around 19 million Pesos, the highest level recorded on localbitcoins for the country within a week.  Cointelegraph reported that in Argentina Central Bank had banned bitcoin a week earlier. This is the same case from Venezuela

Argentine Peso has depreciated 85% against the US dollar in the past 5 years. Other countries that have depreciating local currency tend to use the US dollar for valuing goods and services. This has been the case in many countries when after central banks ban bitcoin, consumers look for alternatives, and OTC and P2P platforms are the first to record spikes in volumes.

Crypto P2P marketplaces do not exist in a vacuum; they are an extension of existing behaviors. If there is money to be made, it will be made. For some countries, it will be escaping the depreciating local currency and others it is trading and capitalizing on lack of other alternatives.

CEO of Localbitcoins recently said in an interview that the platform was receiving 4000-5000 new users per week translating to approximately 135,000 new users monthly. A competitor, Localcryptos, formerly, localethereum, has expanded from supporting only Ethereum and adding bitcoin. In a press release, they said that they intend to add more Ethereum-based tokens for trading in future. Localcryptos is relatively new joining two other older platforms: localbitcoins and Paxful.

There are more alternatives such as newly formed local.bitcoin.com (not to be confused with localbitcoins.com). It was started by bitcoin.com’s Roger Ver for trading bitcoin cash. Other alternatives are: Bisq, Hodl Hodl, Localcoinswap among others. You can view more on this Reddit post. The main point of convergence between different P2P platforms is KYC requirements, nature of wallets (custodial or not) and escrow terms.

Part of the initial appeal for P2P platforms was the lack of stringent KYC verifications. However, as these platforms gain more users they face more pressure to introduce KYC verifications. Localbitcoins in the last few months has started to mandate users to verify their identity in order to trade. It has also cut in-person cash trading.

P2P exchange trade volumes are still a drop in the ocean compared to mainstream exchanges. The future regulatory landscape in most of the emerging markets will determine the extent of growth of P2P crypto platforms. For now, they are serving as important pillars enabling access to bitcoin to diverse populations in different parts of the world based on individual needs.